I can finally tell you about the surprise!  I am so excited!  My newest quilt, “Wild Daisy” will appear in the November issue of American Quilter Magazine!  The article is actually the first of a 2-part series, the second of which will appear in the January issue!  See this link for a preview!   http://www.quiltviews.com/new-series-quilt-debuts-in-the-november-2011-issue-of-aq 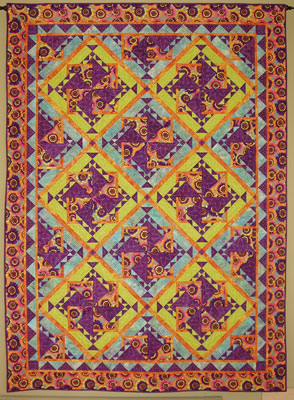 The November issue should be available by the beginning of October.  If you are an American Quilter Association member, you will receive your copy in the mail, if not, rush to your nearest newsstand before I buy all the copies!

It all started when Chris Brown, editor of American Quilter Magazine spotted Driftwood  in the Lancaster AQS show back in March 2010. 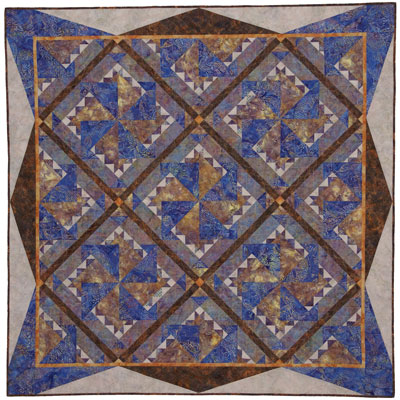 While I was at the show, she contacted me, eager to publish it in the magazine.  Unfortunately, I had already published the pattern and so, no go. Magazines always like to be the first kid on the block to publish something!

So we talked and agreed that Driftwood would get a more colorful cousin with slightly different DNA.  And so the design for Wild Daisy was born!   She is quite bright in person, but the overall design and coloration kind of reminds me of a Persian rug.  Does anyone else see that or is it just me?

While I was busy preparing for our not so welcome visitor, Irene, Wild Daisy was evidently even a contender in a reader poll for the cover of the magazine.  However, being that she’s appearing in a November issue she lost out to a much more subdued, but beautiful winter pictorial quilt!  That’s OK – I’m thrilled that she was even considered!

Don’t be afraid to show that quilt!  You never know who might be looking!
Helle-May