Ok – I know I’m a little late for that, but better late than never!  I sincerely wish everyone a happy and healthy New Year for 2011!

What a January we’ve been having! Snowstorm after snowstorm!  After several days of the weathermen not being able to figure out what we were gonna get this time – rain, mix or snow or when we were gonna get it, mother nature decided she was gonna give us snow – earlier and more than originally expected.  What a mess of a school day it has been!  Buses barely made it for pick up and by the time they reached the schools, they decided to make it an early dismissal day.  I feel most sorry for the bus drivers!  We’ve already had 3 snow days and added 3 days to the end of the school calendar and the winter is far from over!

I was going to go to school today to do a quilt project with my son’s 2nd grade class, but that is re-scheduled for now.  They just finished a unit in social studies on “Colonial Days”, they are working on shapes in math and the teacher is having a baby boy later this spring.  So…. what better time than to have the kids learn about quilts and help to make one.  The classroom is decorated with a jungle animal theme andI found this great juvenile jungle fabric for the backing and borders, a coordinating print with the names of all of the animals and some color coordinates.

I cut the color coordinates and name print into 2 1/2″ squares and drew 16-patch grids (with 2 1/2″ squares) on 11″ x 17″ paper for each child.  I also experimented and found that the Elmer’s Craft Bond Repositionable Glue Sticks worked well to hold the fabric squares to the paper long enough for me get the papers home and sew the blocks together.  It doesn’t seem to leave a residue on and fabric came off easily.  So the children will design their own quilt blocks that I will later sew into a quilt for their teacher as a gift from the class for her new baby. 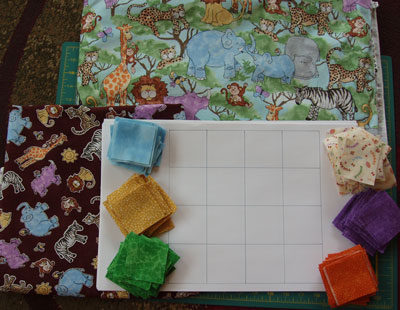 So the plan was to bring in a few quilts to show the kids, show them a book I found with pictures of a colonial quilting bee and traditional quilts, design the blocks and time permitting read them The Quiltmaker’s Journey by Jeff Brumbeau and Gail De Marcken, a story about the gift of giving and the meaning of true happiness.  We will have to re-schedule, but I am still looking forward to it.  I have done a school quilt project every year the boys have been in school and I never cease  to be amazed at how much the children enjoy it, both boys and girls.  I will post a picture of the completed quilt when it’s done.

I have a few hours before the kids get home, so I think I’ll clean up the sewing studio a bit and get ready for the next project!