Remember that quilt project I started with my son’s second grade class at the end of January?  (Happy New Year January 26, 2011 ) Well,  I finished it and the kids gave it to their teacher as their group present for her “Baby Sprinkle” in school on Tuesday.  What’s a Baby Sprinkle?  Evidently it’s the new term for a baby shower for a mom who already has a child.  Just a “sprinkle” of gifts for the new baby instead of a shower of gifts for the mom who is starting from scratch.

On one hand, the kids were so excited to have the party and present the quilt!   On the other, some were sad that she would be leaving for the remainder of the school year.  There were so many hugs, I was worried that the kids might accidentally pop the baby out!  I wish I could post a picture of the entire class, but without each parent’s permission, I didn’t want to take a chance.  So here is Mrs. Hale with her new quilt! 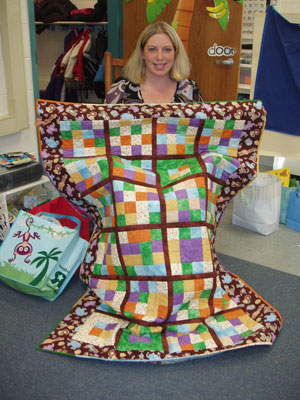 Each child designed their own block.  My only request was that each block have at least one square of the light colored fabric with the animal names.  Much to my surprise, the children took it upon themselves to increase their color selection by also using the backs of the fabric squares.  They placed the fabric squares on a griddded piece of paper which I had spread with a Elmer’s Repositionable Glue stick.  This allowed me to easily take the blocks home to sew together exactly as they had been designed.  Each block was completely unique.

I then quilted their signature in each block. 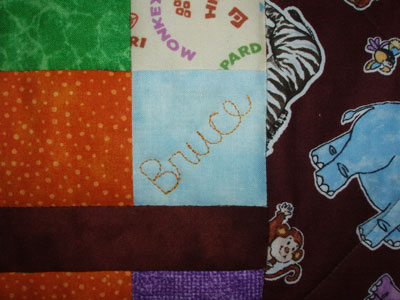 Knowing that the children would want to touch and love the quilt, I took the quilt home after the party and washed it one more time before bringing it back for mother and baby to enjoy!