Remember that Celtic knot workshop I took with Linda Hahn back in November?  I missed a birthday party for my husband’s grandmother to be there, so I vowed I would make the knots into pillows for her, my mother-in-law and aunt-in-law.  Well I actually did finish the pillows for Christmas – well at least one.  I finished the other two pillows by shipping the boys (all 3) to my in-laws to watch the Eagles game on Sunday.  (We are right in between Eagles and Giants territory and we don’t get 2 or 3 games per season.  When we moved to NJ, we agreed that instead of spending money on a cable package just to get those games – my husband and the boys could take the opportunity to spend some quality time with Grandma and Grandpop and I could spend some quality time with my sewing machine.  Seemed fair and everyone is happy!)

I had made the “knots” at the workshop.  All that needed to be done was to iron  and sew them to fabric.  It was a lot easier than I thought it would be to zig zag them down.  I used a Sulky tear-away stabilizer on the back and a smoke colored mono-filament thread.   I happened to have two 14″ pillow forms.  I purchased the third one from my local Wal-Mart.  All of the pillows came out nice – but I hate to admit it that made the Wal-Mart form made the nicest shaped pillow.

So here they are: 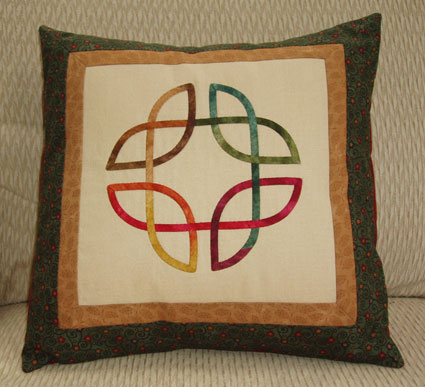